Some Places to Visit in the Westcountry

This blog started off as "places to visit in England" but that would be far too big a subject. So here we have some places to visit in the south-west of England, some well-known and others less so. Future blogs will cover other parts of the country. 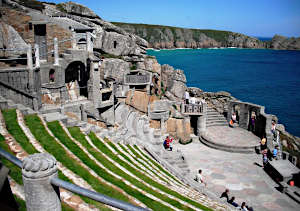 When we think of theatre, we think first-and-foremost of the "West End". Much further west than the traditional West End, is the most westerly theatre in England: the Minack Theatre. Indeed, you really can't get any further west without getting your feet wet!

Created in the 1930s, the Minack Theatre is an open-air venue set in a spectacular cliffside location just along the coast from Land's End. It's about as far from a conventional theatre as one could imagine, yet the backdrop of the Atlantic lends a unique atmosphere to every production. The season runs from Easter to September, with a  full programme of plays including Shakespeare. When there's not a play in progress the theatre is open for visitors to just come along and wonder at the amazing imagination of its creator.

Even further west are the Isles of Scilly, a beautiful sub-tropical archipelago a few miles beyond Land's End. Legend has it that the Lost Land of Lyonesse lies between the islands and the mainland. It's my own theory that the Scillies were Lyonesse, once a single island until sea levels rose and separated them. 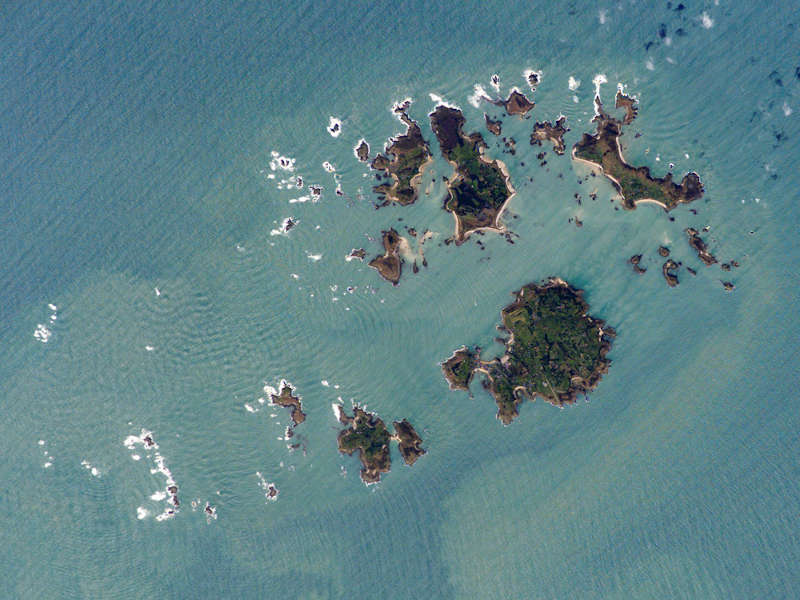 You can fly to the Scillies from Land's End Airport (yes, there really is one!) or take the boat from Penzance. Once there, hop from island to island by water taxi. St Mary's is the largest island, with the only town and the Star Castle Hotel. Our favourite is St Agnes with the adjoining Gugh. On the other side of St Mary's Sound is Tresco, famous for its gardens and abbey and Bryher.  Everywhere is simply wonderful.

Dartmoor is most famous for its prison in Princetown, and perhaps for Haytor and Widecombe-in-the-Moor. There are lots of other amazingly picturesque places to visit though. I could mention Fingle Bridge, Becky Falls, Dartmeet, Postbridge or Holne Chase, all worthy of a visit. But today I want to highlight Wistman's Wood. It's probably the highest oak woodland in the country and the wild, exposed location gives it a very special character. These are not the traditional "mighty oaks" but gnarled and contorted dwarf oaks with branches bowing down to ground level amongst the rocks. The moss that covers both trees and boulders confers an eerie green cast upon the area.

Cheddar is the most universal cheese in the world, originally made and matured in the limestone caves at the base of Cheddar Gorge. Those caves have also become famous for their spectacular beauty and the archaeological finds that have been discovered there, including the oldest complete skeleton found in Britain. 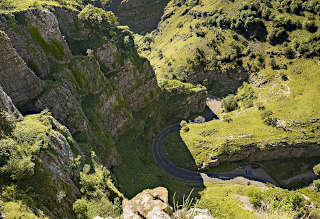 Cheddar Gorge is a 400 foot deep slash in the Mendip Hills created a million years ago by glaciers. It's a breathtaking setting that provides heart-pumping exercise for walkers following the paths on the side of the gorge or cyclists who pound their way up the road. For those who choose to stay in their car, it's a lovely drive to wind up through the gorge before popping out on top of the Mendips. The Bath Arms Hotel in Cheddar village provides top-class food and a comfy stay close to the gorge.

The last place on this very abbreviated list is probably the most famous: the Roman baths in Bath. The hot springs were known to the Britons before the Romans even arrived, but it was they (the Romans) that developed the baths and the temple to Minerva that established Aquae Sulis as an important "resort".  It faded away again when the Romans left and was rediscovered by the Georgians when "taking the water" became a fashionable pursuit. With the use of the golden Bath stone, the Georgians built the famous pump rooms, and a whole city as well.

The modern tour of the Pump Rooms and Baths is a fascinating delve into more than two thousand years of history and we highly recommend it.

Newsletter, February 2021
Some Places to Visit in the Westcountry
Newsletter, December 2020
Some of the World's Most Beautiful Villages
Newsletter, October 2020
A Head For Heights
Lanzarote
Road Racing on The Island